The Golden Cemetery has been owned and operated by the City of Golden since 1873. Nestled in the foothills of the Rocky Mountains, the cemetery maintains the character of Golden’s rich history. Among the historic notables buried here is Capt. George West. West was one of the founders of Golden and also founded the Colorado Transcript newspaper in 1866. This newspaper, now known as the Golden Transcript, is still in publication today. Seth Lake, builder of the Astor House Hotel in 1867, is also buried in the Golden Cemetery. The first stone building in Golden, the Astor House helped to establish a sense of prosperity and permanency in a growing city. Another resident of Golden Cemetery, Captain E. L. Berthoud, with famed mountain man Jim Bridger as his guide, discovered “Berthoud Pass” in 1861. Many other pioneers and characters of the early west are at rest in Golden Cemetery.

George West was born on November 6, 1826 in a small farm town called Claremont in New Hampshire. At the age of 14 George worked at a newspaper office in his hometown. He then worked and completed his apprenticeship for the Boston Transcript. He also became one of the big names and owner of Stereotype Iron Industry in Boston, Massachusetts. Along with fourteen other men in Boston, George helped the Mechanics Mining and Trading Company on March 3, 1859. He helped them get subscriptions of money which exceeded $2,064. After hearing of the findings of gold in the West, George and a group of men left Boston to go west. In Colorado the Gold Rush of 1859 happened, it was called Pikes Peak Gold Rush. Gold was found on the South Platte River, which is now known as Cherry Creek. After hearing of this they decided to head West in the area of Colorado.

Captain Edward Louis Berthoud was a military officer, statesman and engineer in the western United States during the late 19th century. He is primarily known as the chief engineer and secretary of the Colorado Central Railroad during its expansion throughout Colorado in the 1870s. The town of Berthoud, Colorado, as well as Berthoud Pass in the Rocky Mountains west of Denver, are named for him.

Berthoud was born Edouard Louis Berthoud (pronounced “bare-too”) in Geneva, Switzerland on March 29th 1828. He came to the United States in 1830 with his parents and spent his childhood along the Mohawk River and in Oneida County in Upstate New York. In the United States, the family Americanized the pronunciation of their name to “ber-thud”.

Berthoud graduated with a degree in engineering from Union College in 1849. In the early 1850s he worked as a surveyor on the Panama Canal. In 1855, he was living in Leavenworth in the Kansas Territory where he became interested in the effort to build the first transcontinental railroad. In 1860, during the Colorado Gold Rush, Berthoud and his wife Helen settled in the western part of the territory in the new town of Golden. Helen was a daughter of a founding Golden family, the Ferrells, and an original street of the town was named in her honor. In 1861, the town became part of the Colorado Territory. Berthoud spent much of his career surveying roads and railways throughout the region, and became an active citizen in Golden.

In 1861, in an effort to establish a more direct route from Denver to Salt Lake City, he surveyed the first road to Middle Park and discovered and surveyed the pass that now bears his name (current route of U.S. Highway 40). He also named Vasquez Peak. In 1862, after the outbreak of the American Civil War, he volunteered for the Union Army and received a commission in the 2nd Colorado Volunteer Infantry. That same year he received commendations for his design of fortifications to save Jefferson City, Missouri, during a rebel attack.

Berthoud died in Golden in 1910 as a result of injuries sustained in a fall at the Overland, joining his wife who preceded him in the 1880s. The Colorado School of Mines dedicated Berthoud Hall in his honor in 1940. 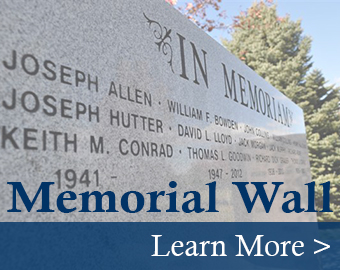 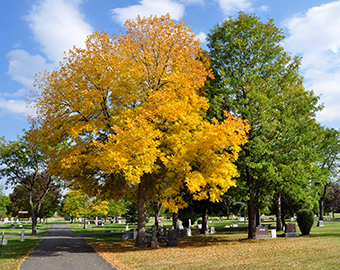 A beautifully maintained
cemetery nestled at the base
of the Rocky Mountain foothills
Gates open: 6:00 AM - Dusk
Office Hours:
Monday-Friday 8:00 am - 3:00 pm